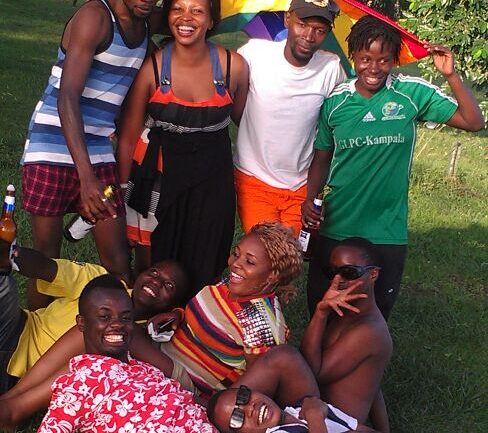 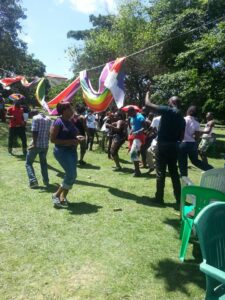 An inspiring and courageous IDAHOT/Pride event took place in Entebbe on the banks of Lake Victoria in Uganda to mark IDAHOT International Day Against Homophobia, Transphobia, and Biphobia 2015. The theme of the gathering was “Solidarity and Togetherness, Our Identity”. The event was organised by the grassroots Ugandan LGBTi organisation Youth on Rock Foundation, and co-sponsored by Rainbow International LGBT Activist Solidarity Fund, Sexual Minorities Uganda (SMUG), and UHAI East African Sexual Health Rights Initiative. 240 LGBT Ugandans attended the event. The photos we are able to share are limited due to safety concerns for the attendees. Sadly, virulently anti-LGBT newspapers in Uganda regularly publish photos of LGBT people to ‘out’ them publicly and deliberately ruin lives, resulting in evictions, job losses, and physical attacks.

IDAHOT is a Worldwide celebration of sexual and gender diversities. Frank Kamya, Programs Coordinator of Youth on Rock Foundation said, “I take this honor on behalf of Youth on Rock Foundation and as the coordinator of the event to thank everyone who took part. The event brought together 240 ugandan lgbt and sw both from different organisations, and it was a huge sign of reflection that solidarity and togetherness wins. Let’s continue getting together as one community and with time we will gain more visibility, recognition, respect and dignity. Lets not give up till our LGBTQ rights and health rights are recognised just like other rights. Big thanks goes to our co sponsors of the event, UHAI EASHRI, Rainbow International LGBT Activist Solidarity Fund, and SMUG (Sexual Minorities Uganda), and also the Youth on Rock Foundation organising committee. Without you this dream wouldn’t come into a reality!”

A participant at the event commented, “We had nice time we met new friends we got to know one and another and the best thing in life is to be with a friend who knows you and who can love you as the way you are. It is better to be with one friend who knows you than 1000 friends when they can’t understand you and accept you as you are. I love you all my sweet friends.”

Another attendee at the IDAHOT event said, “The celebrations went on well. It was a great time to connect, network, and share stories with our fellow LGBTI members.”