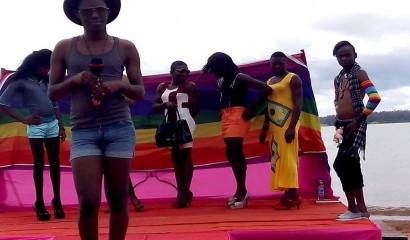 Uganda held its largest ever rally for LGBTI rights  (17 May 2016). Brave Ugandans risked arrest and attack by holding IDAHOT event.

The event, scheduled to coincide with International Day Against Homophobia, Biphobia and Transphobia, saw around 300 Ugandan LGBTI celebrate and enjoy and live in as much freedom as they could.
Sponsored by the Rainbow International LGBT Activist Solidarity Fund, it saw a protest against LGBTI inequality, food and drink, performances on a pink and rainbow flag stage and beach games on the beautiful shores of Lake Victoria in Kampala.
Activists were cautious about plans for IDAHOT. They were unable to publicize it for fears of attacks or police intrusion. The army had been marching through the streets, using tear gas, and had blocked several roads only last Wednesday.
But the event went well. The authorities didn’t shut it down and no one has been reported hurt going to or leaving the event, which was hosted by the grassroots group Foundation for Gender and Sexual Rights Uganda.
‘IDAHOT is the day we can celebrate our identities as a LGBTI community in Uganda. We can come together to share our own journeys and challenges as LGBTI people living in one of the most hostile countries to be gay,’ Kamya Francis Mwanje, the director of the Foundation for Gender and Sexual Rights Uganda, told Gay Star News.
‘Sharing these stories helps us to build our self-esteem. It enables to advocate more about our issues and to educate the public about who we are and how we need to be treated.’