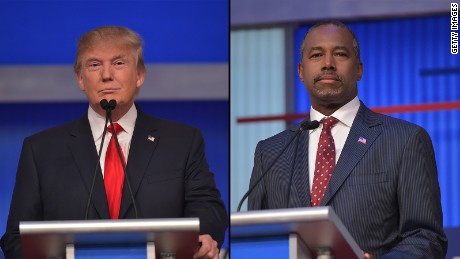 Former Fox News pundit Dr Carson has been nominated to serve as the President-elect’s Housing and Urban Development Secretary despite previously insisting he was not qualified to run a government department when floated for the role.

Dr Carson is known for his endless font of surreal views about homosexuality – comparing gay people to paedophiles and insisting that prisons ‘prove’ being gay is a choice.

He doubled down on his record of homophobic comments at his confirmation hearing today, refusing to disavow anything he has said previously.

He insisted: “Of course, I would enforce all the laws of the land. Of course, I think all Americans should be protected by the law [but] what I have said before is I don’t think anyone should get ‘extra rights’.”

He was repeating comments made last year, when he insisted he opposes equal marriage and anti-discrimination protections because gay people are “abnormal”.

Dr Carson said at the time:”One of the very reasons that I have been an outspoken opponent of things like gay marriage… I don’t have any problem with gay people doing anything they want to do. You know, it’s a free country, there’s freedom of association.

“However, when you now impose your value system on everybody else and change fundamental definitions and principles of society, I have a big problem with that.

“Everybody is equal, everybody has equal rights, but nobody gets extra rights. And when we start trying to impose the extra rights based on a few people who perhaps are abnormal, where does that lead?”

They’re a basic human rights — rights that people died for. Carson’s record on equality raises a number of serious questions about how he’d run a key department for the LGBTQ community — and his hearing today did little more to answer them.”

The Republican previously insisted that same-sex marriage is a Marxist plot from the New World Order, claiming in a speech to a listed anti-LGBT hate group that gay weddings are part of a plan “to destroy unity [and] bring America down.”

Carson previously claimed that gay people were responsible for the fall of the Roman Empire, warned that “there will be mass killings once again” over same-sex marriage, and insisted that gay weddings are like car seats for conjoined twins.

He has also claimed equal marriage is a Marxist plot created by the ‘New World Order’.

Speaking at an event for the anti-LGBT National Organisation for Marriage, he claimed “[America’s] strength lies in our unity. And there are so many forces that are there to try to destroy that unity —the only way to bring America down.

“If you look in a lot of writings of the Neo-Marxists when they talk about the New World Order, they say there’s only one stick in the mud: how do you get them out of the way and how do you change them?

“They said there were two things: their Judeo-Christian faith, and their strong families. Those were the things that had to be attacked, and those things have been systematically attacked.

“There’s a book called the Naked Communist… it lays out the whole agenda of how to attack the family and the Judeo-Christian values, to weaken the structure of America.

“This stuff is not secret, you can read about it. You can see all the things that are happening in America today.”

He continued later: “When we talk about liberty and justice for all, doesn’t that mean that people can be left alone, that no-one else gets to change definitions on them and change life for them?”

“They have no right to say to me that I must change the way I think in order to accommodate what they believe.

“That’s where the injustice comes from, and we have to understand that.”