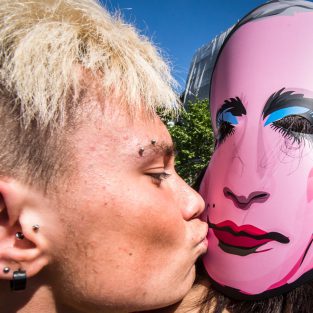 In many countries across the world, 2015 saw governments take major leaps forward in terms of LGBT equality – from same-sex marriage in Ireland to debates in Westminster over the recognition of transgender people.

While for some it may feel the battle has been won, in many countries, it is barely just beginning, as lesbian, gay, bisexual and transgender people face persecution and in some cases, death.

ASSOCIATED PRESS
When Vladimir Putin signed the ban on “gay propaganda” into law on June 30, 2013, it was only a glimpse of what was to come.

The law criminalised LGBT-friendly public acts and demonstrations, which in turn set off a firestorm of events including arrests, international protests, boycotts, and outrage from public figures and celebrities alike.

Which brings us to 2015. With the “gay propaganda” law still in place many events have occurred within the year and without the media attention of the Sochi Olympics, many activists have been left to fight the battles alone.

In July, Putin’s party unveiled a “straight flag” which one of its politicians described as “Our answer to same sex marriages, this mockery of the very concept of family. We must prevent gay fever in our country and support traditional values.”

By November it became clear that a law could be passed in the state that would make the act of coming out illegal. The proposal was made in an attempt to expand upon the 2013 propaganda ban.

Two elected officials made the announcement that they are seeking to criminalise the act of coming out. The proposed amendment to the Russian Administrative Code would make “public expression of non-traditional sexual relations” a violation punishable by a fine.

But the the penalty is more severe–up to 15 days in jail–if the “offence” takes place in an educational or governmental setting.

The future for LGBT in Russia is uncertain, and there has been small victories. In March the Dzerzhinsky District Court of Nizhny Tagil overturned the January 23rd conviction of an activist, Elena Klimova, for “promotion of homosexuality,” in what could be described as a landmark ruling.

A spokesperson from Russian LGBT Network told the Huffington Post UK about the feeling on the ground in Russia in 2015.

“Right now, the situation with LGBT rights in Russia is quite complicated. The consequences of the so-called “propaganda law” itself are numerous.

“One the one hand, now everyone in Russia know who are gays and lesbians – before we had to explain just the fact that we exist. We got a lot of new allies and supporters. On the other hand, the hate crimes against LGBT became numerous.

“Moreover, now the perpetuators know that the state supports them. In mass media, LGBT portrayed almost exclusively as perverts, sick people or “agents of West.”

“Indeed, the Olympic Games attended a load of attention to the violation of LGBT rights in Russia worldwide, but unfortunately, it had very small impact on the situation in the country,”.
Islamic State persecuting gays