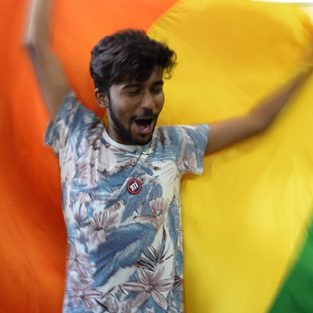 India’s top court is to review a decision that upheld a colonial-era law which criminalises gay sex, in a victory for rights campaigners at a time when the country is navigating a path between tradition and modernity.

The supreme court on Tuesday asked a five-judge bench to reconsider its 2013 ruling that only parliament can change the 1860 law, which imposes a 10-year sentence for gay sex.

“It is definitely a move forward,” said lawyer Anand Grover, as activists cheered outside the court.
Indian LGBT activists hold vigils before court rules on anti-gay law
Read more
This is the last legal avenue for campaigners seeking to use the courts to strike down the law. If unsuccessful, any future decisions to lift the ban will rest with politicians, who are largely conservative and opposed to change.

The supreme court made a surprise ruling in 2013 that reinstated the ban on gay sex after a four-year period of decriminalisation.

After the hearing, gay rights activists outside the court sang: “We will be successful.”

Polls show about three-quarters of Indians disapprove of gay sex and are deeply traditional about other issues of sexuality, such as sex outside of marriage.

India is one of 75 countries where gay sex is illegal, according to the International Lesbian, Gay, Bisexual, Trans and Intersex Association.

Although the law banning gay sex is rarely enforced in India, it is used to intimidate, harass, blackmail and extort money from gay people, activists say.

There are no official figures on the number of cases of harassment, and most go unreported as victims are too scared to report crimes to the police, fearing they will be punished too, activists say.

While the previous Congress-led government had pledged to repeal the law if it came to power again, it was crushed by Narendra Modi’s Bharatiya Janata party in general elections in May 2014.

In December, members of the BJP, which has an overwhelming majority in the lower house of parliament, scuppered a private member’s bill to scrap the law.

“It is about principles of freedom enshrined in our constitution,” said Shashi Tharoor, the opposition Congress politician who introduced the bill.