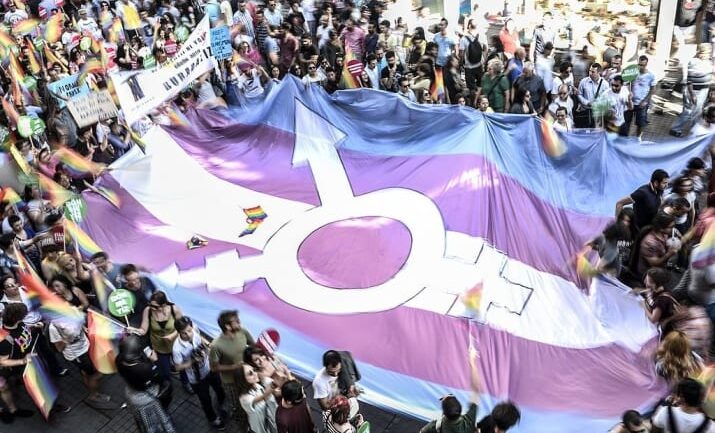 In six Australian states and territories, married transgender people have to divorce before they can legally change the sex on their birth certificate. The United Nations says it’s a violation of their human rights.

Australian laws barring married transgender people from changing the sex on their birth certificate are in violation of international human rights law, a United Nations committee has declared.

In a decision made on March 17 and published on June 15, the UN Human Rights Committee found in favour of a married transgender woman from New South Wales, Australia, who had tried unsuccessfully on multiple occasions to change the sex on her birth certificate.

The laws preventing her from doing so violate the rights outlined in articles 17 and 26 of the International Covenant on Civil and Political Rights (ICCPR), the committee found.

It is a significant ruling for Australia, where in six of the eight states and territories married transgender people must divorce from their spouse if they want to change the sex listed on their birth certificate.

The woman, referred to only as G, was born in 1974 and started hormone therapy for gender transition in 2000. In 2002 she changed her name to G on various ID documents and in 2005 had gender affirmation surgery.

In September 2005 she married a woman. But the marriage meant that when, four months later, G tried to change the sex on her birth certificate, she was unsuccessful.

In order to change the sex on a birth certificate in NSW, a person must be over 18, have had their birth registered in NSW, undergone gender affirmation surgery and be unmarried. G fits the first three criteria, but not the last.

She first applied for a birth certificate change of sex in January 2006 but was rejected two days later. Second and third attempts in October 2008 and July 2010 met a similar fate.

The NSW Births, Deaths and Marriages Registry wrote to G in July 2010 saying she had to be unmarried in order to change the certificate.

But as G told the UN committee, she is in “a loving relationship with her spouse and does not intend to apply for a divorce”.

In its ruling the UN committee said there was “no apparent reason” to deny G her birth certificate change, and identified a number of inconsistencies presented by Australian law around marriage and gender transition.

“The author was validly married in Australia,” the decision read. “Following her gender reassignment, she lawfully has been issued passports designating her as female and changed her name on, inter alia, her birth certificate, passport, driver’s licence, and medicare card.

“It is also uncontested that as a result of her gender reassignment, the author has lived on a day to day basis in a loving, married relationship with a female spouse that [Australia] has recognised in all respects as valid. There is no apparent reason for refusing to conform the author’s birth certificate to this lawful reality.”

The committee directed Australia to provide G with a birth certificate marked female, to revise the law to stop this happening to transgender people in the future, and to respond to the ruling by December 15, 2017.

Australia has ratified the ICCPR and must respond to the decision – but it is not compelled to actually change the law.

NSW, Western Australia, Queensland, Tasmania, Victoria and the Northern Territory require married transgender people to divorce from their spouse if they want to change the sex listed on their birth certificate.

The Australian Capital Territory nixed the divorce requirement in 2008 and South Australia followed in 2016 – coincidentally, on the same day a vote on similar legislation proposed by the Victorian government failed.

BuzzFeed News understands the federal government is currently consulting with the NSW government about the UN committee decision and expects to provide a response by the requested date.

NSW attorney-general Mark Speakman told BuzzFeed News that changing the sex on your birth certificate could void the marriage anyway, given same-sex marriage is not legal in Australia.

“The effect for a married person of amending the sex recorded on the register from that recorded at birth, and the subsequent issuing of a new birth certificate, may be the marriage itself being voided,” he said.

“This result may apply notwithstanding the legal position in any state or territory.”

The UN committee said it was unclear why changed birth certificates are, and changed passports are not, a threat to the Marriage Act.

“The state party has not provided any explanation why a change in sex on a birth certificate would result in irreconcilable and unacceptable conflict with the Marriage Act if the author remains married, whereas a change in sex on her passport in identical circumstances is allowed,” the decision read.

It also questioned why it was in Australia’s interests to allow conflicting identity documents “that are not consistent with the actual personal situation”.

Sally Goldner, the director of Transgender Victoria, told BuzzFeed News that having mismatching documentation can present risks in privacy, safety and employment.

The psychological impact of having the correct documentation is also significant, Goldner said. When she recently travelled overseas for the first time in two decades, her passport turned up with an “F” on it.

“I didn’t realise until I saw it how affirming that was,” she said. “It’s practical, but it’s much deeper than that. I don’t know if other people [who are not transgender] can appreciate that.”

Goldner added that it was “sad” that the woman had to seek redress from the UN.

“Most of our governments and parliaments are just so disrespectful to trans and gender diverse people,” she said. “It’s certainly a decision that gives a lot of momentum, but the onus is on the remaining governments to take action.”